Magneplan is a manufacturer specialized in making planar magnetic dipolar speaker delivering vibrant and accurate sound. Basically, DWM is a bass panel of Magnepan MG 20.7’s biggest product range.  If you own small-sized models such as MG1.7, MG12, MMG, Mini Maggie… and feeling a lack of bass, you may add one or two DWM bass panels according to your room’s space.

DWM speaker will extend range of sound, adding more bass to 2 main speakers. This speaker can also be joined with common small-sized bookshelf speakers which often lack bass though work well with panel speakers from the same manufacturer for synchronization in setting. This is a case in which a bass panel is wired with main panel speakers.

DWM speaker was tested by us in a lot of setups. The bass panel was tested in many configurations.

Either series or parallel setup didn’t have much difference in sound quality. Though, series setup sounded rounder and more condense than parallel setup. But in parallel circuit, music felt free and more appealing. The two cases were good and applicable in accordance with accompanied amp.

In setting of Technics SU-V100D or Bryston 7B monoblock with one or two bass panels with two main panels, sound space appeared widened, dynamic, brilliant and clear; bass was thick while mid-range and treble were detailed. The solution in which DWM bass panel is joined with MG12 speaker can replace pricier solution (costing around $5,000).

Using Technics and Seprano tube amp appeared superior as it benefited from tube amp (fast and neat) and semiconductor (warm and elegant).

Using a powerful amp for bass and limited-power amp for treble and mid-range followed the principle of sound organization (low-power amp is good at dealing with detail while bass-range requires more power). 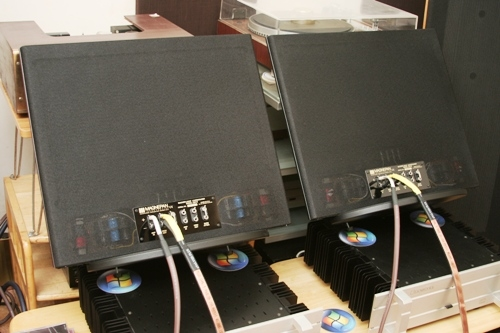 With a limited number of instruments and artists, a system including 2x MG12 and 2x DWM was able to deliver sound completely, CD “Duos For Violin & Guitar” with violin and guitar solos (performed by Paganini and Giuliani) showed it best. Each instrument (either violin or classic guitar) showed off its forte and foible in comparison with other instruments.

DWM made mid-range and treble more striking because audio background was strengthened. Thus, instrumental sound was maximally supported by the system. There’s no small mistake between sounds of instruments from different families (string or woodwind). Shostakovich – Piano Concertos No1 & 2 and others are CDs that provide clearest definition of piano as quality (in performance, recording) is very high. This CD brings audience away from the real life to a romantic world whose sound is not only modern but also impressive… naturally from the first note until the end of the song. Thanks to lengthened bass range, piano’s low bass notes are performed completely than ever and listener seems concentrating more on rolling chords.

Not only supporting piano, but also does DWM bass panel go with cello and contrabass, apparently shown in CD “Shostakovic – Cello Concertos Nos 1 & 2 vàLondon Symphony Orchestra”. Right from staccato notes of cello, cello’s bass was not only deep but also rounded. Meanwhile, contrabass band’s bass spread all over thickly and deeply… Unless the listener gets used to full-range music, when listening to this CD or any other sound through MG12 and DWM, it’d be better to focus on subtle development in mid-range and treble instead of bass. Well, the system did handling sound very well.